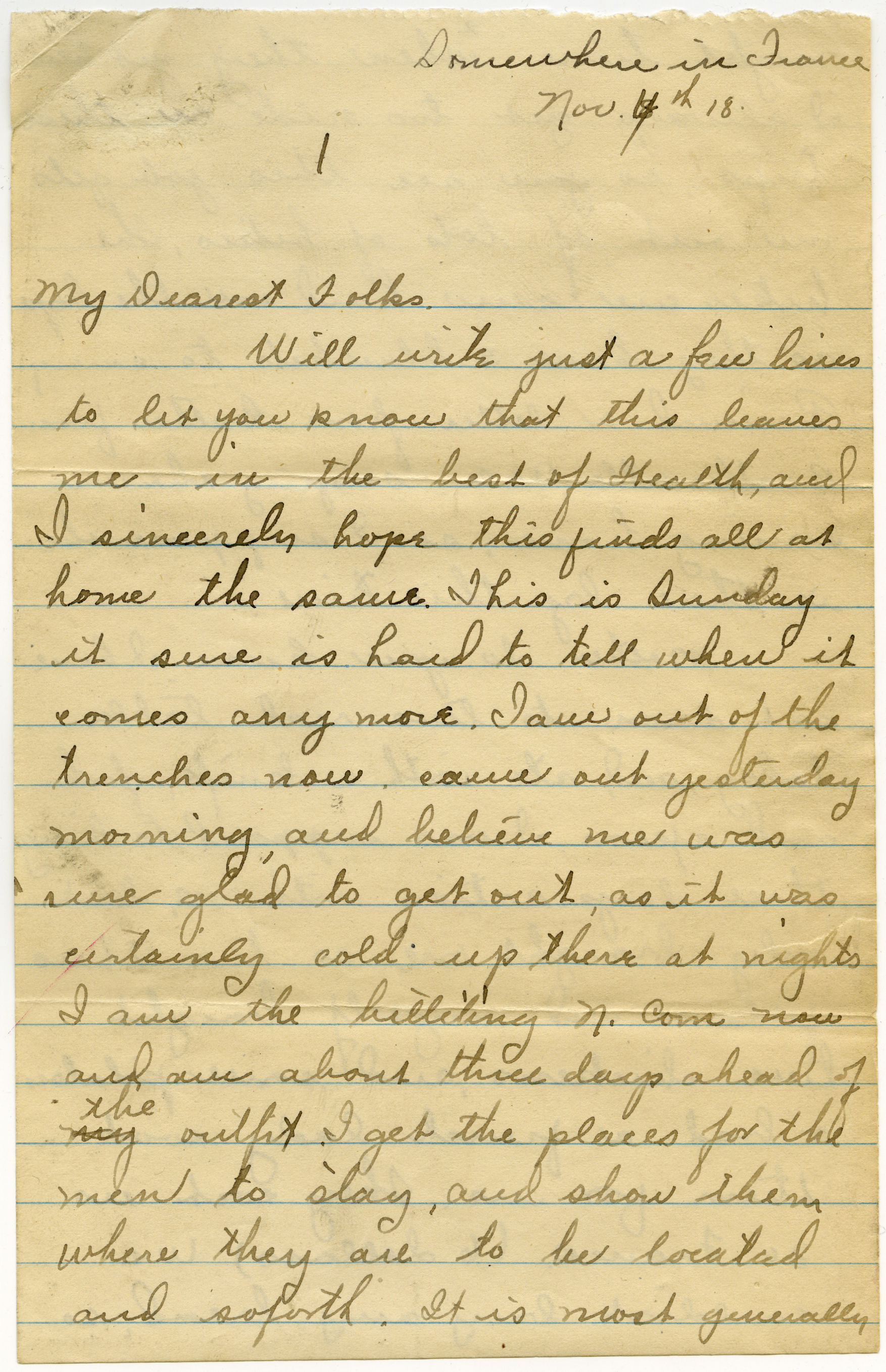 My Dearest Folks. Will write just a few lines to let you know that this leaves me in the best of health, and I sincerely hope this finds all at home the same. This is Sunday it sure is hard to tell when it comes any more. I am out of the trenches now. came out yesterday morning, and believe me was sure glad to get out, as it was certainly cold up there at nights I am the hilliling N. com now and am about three days ahead of the outfit. I get the places for the men to stay, and who them where they are to be located and soforth. It is most generally night time when they get here. I always get too ride on these trips, so you se this job gets me out of lots of hikes, The hikes are sure hard on the boys as they have 3 blankets to carry Received a letter from Esther from Bartlesville, Okla. saying she was coming home, so I suppose she is there by this time. Mother do you know I have sat down to two real tables today, and ate with a knife, fork and spoon. I was supposed to bring three days ration with me, but only bought one so two others fellows and myself bought two chickens, and some potatoes & had a french lady cook them for us. They cost us 30 Francs. (6 dollars) We couldnt buy any bread, so we had too do without that. We are in a town about 90 houses, but that is almost the average for these French towns. I have been on some of the largest battle fields and in the thickest of fighting, the world has ever seen, and that is at “Verdun”. Things are sure shot up around there, and I dont think that there is foot of ground that hasnt had a big shell exploded on it. Some of the holes would make a dandy foundation for a nine roomed house but every time the Huns sent a bullet our guns received the shots, and every twice a gun 4 would go off the earth trembled for a mile around. There were to Hun patrols came over while we were in the trenches, but all they got was our “lead”. I happened to be on duty when they came over I sure was excited, but I kept my head, and we gave them hand grenades, rifle grenades, and a little machine gunfire They left one of these large guns behind, which we got. This is the first day I have been where I couldnt hear the roaring of the big guns, and is sure nice to hear yourself think once more. I had a letter from Aunt Hannah, they are all well in England. I wish it could be that I could see them before I come home. Well mother what do you think of the war news now, pretty good is it not? We are making them lie down one by one. I think the game will be over by Xmas wouldnt that news e a great xmas present to all our Mothers. I have been lucky so far, never had a scratch, and something tells me I sam going to come thru O.K. so dont worry about me. Well I will now close for this line hoping to hear from you all soon. Your Loving Ron & Brother Corp. Joe