Hugh Luck was a football player and President of the Demosthenonian Debating Club at K.S.N.S. in 1915. The 1915 Echo writes of the club, “Today, as in the days of yore, the Demosthenonians are struggling for the things worth while. Every man is a firm believer in our club motto: “There’s nothing too good for us to do; Nothing too great for us to try.” With these majestic thoughts he stares far in the distant future and sets a standard which all other clubs can watch but never equal.”

Luck was photographed with the Football Club in 1915; he is the first player on the left of the second row. 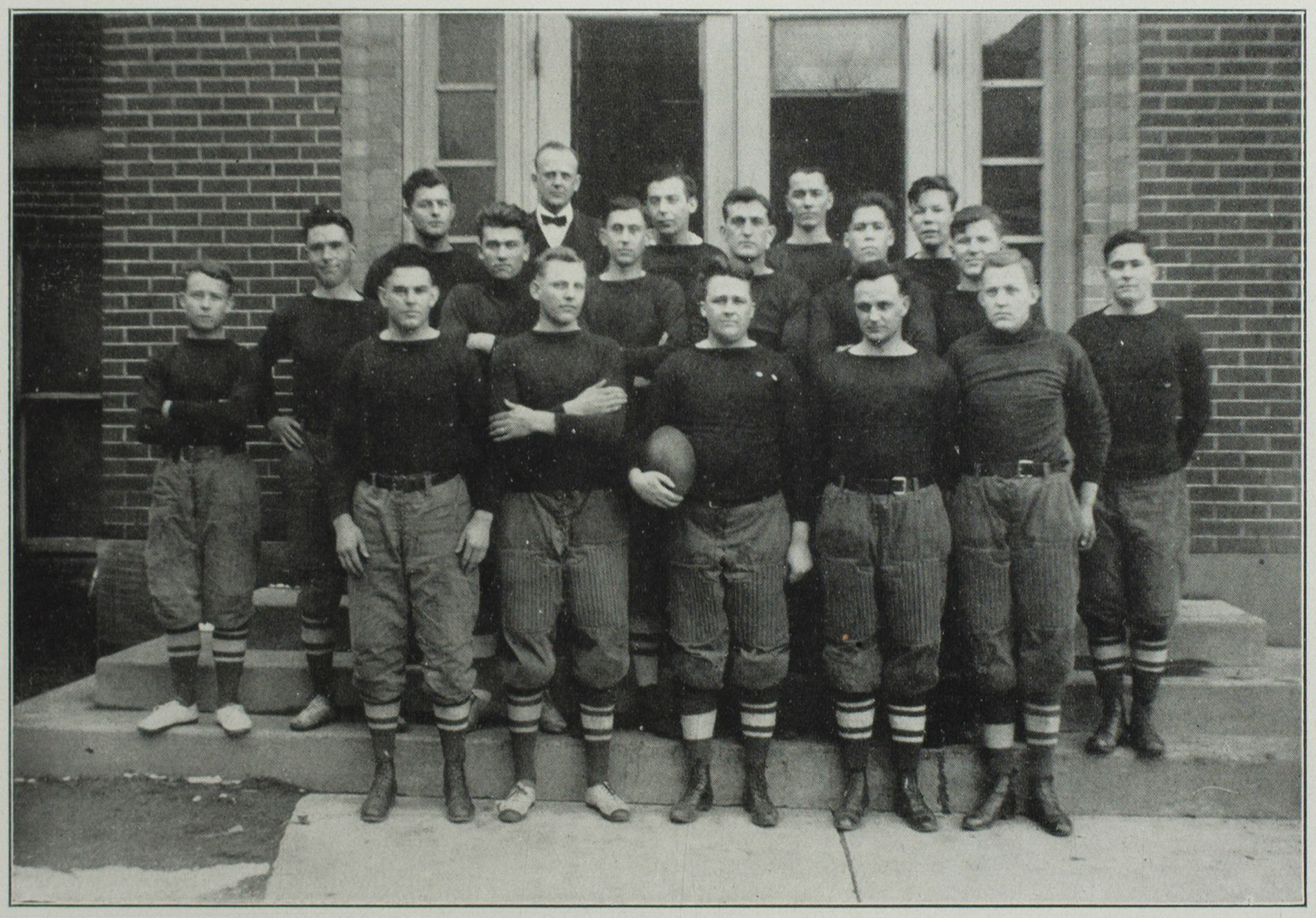 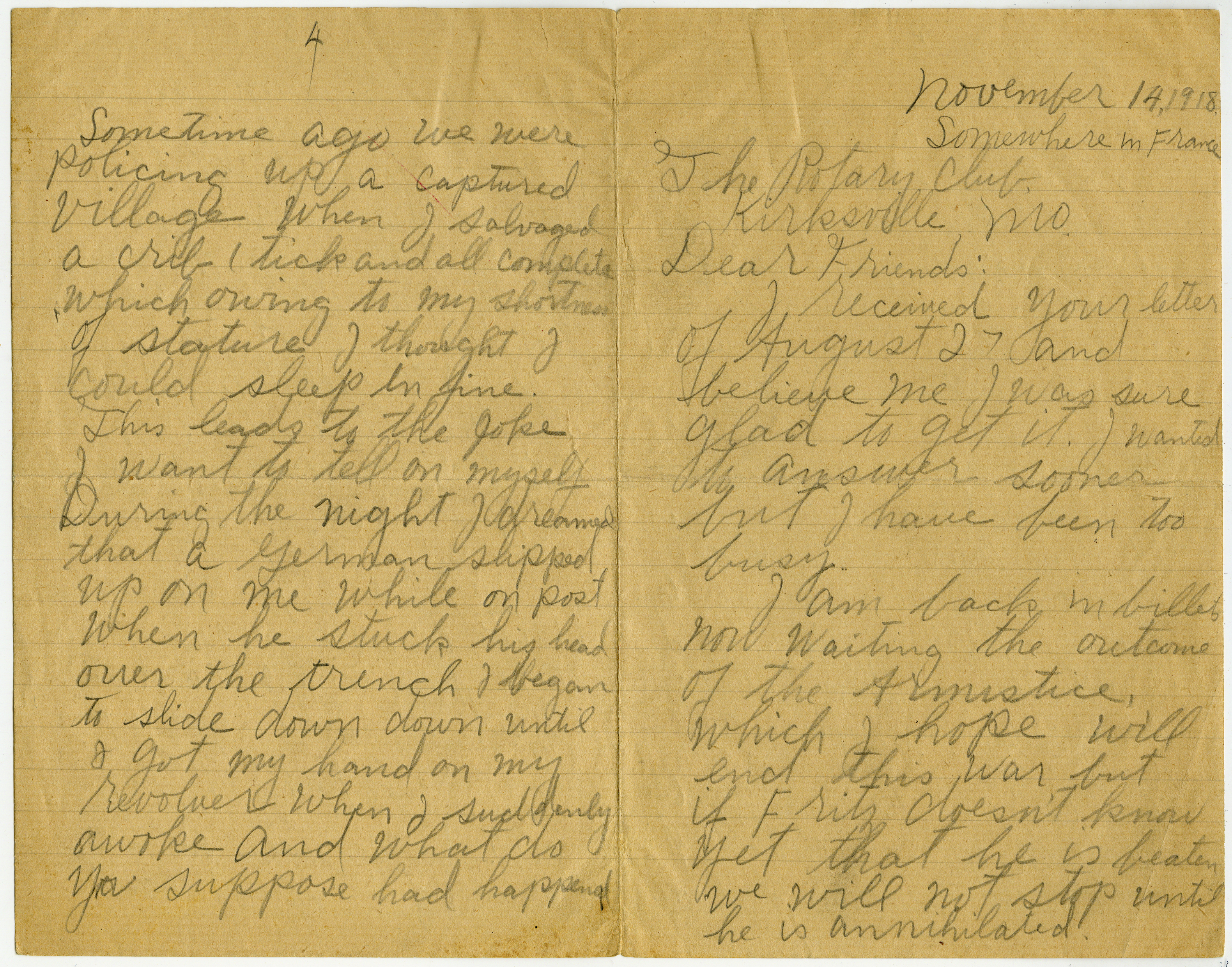 Dear Friends:
I received your letter of August 27 and believe me I was sure glad to get it. I wanted the answer sooner but I have been too busy.
I am back in billets now waiting the outcome of the Armistice, which I hope will end this war but if Fritz doesn’t know yet that he is beaten we will not stop until he is annihilated.
We had quite an exciting race against time the day of the Armistice. We were called on to cross the Meuse and occupy the heights beyond. We had about three kilometers to go and only an hour to get our battalion across before time to cease firing. We had to go all of the way under shell fire and cross the river on a raft. Of course everybody was thinking what if I would get killed after going through everything so far in safety and then to get killed when peace was possibly only a question of minutes But I am thankful to say none of our battalion were hurt and we were the only company to get across before the time limit expired.
We were pulled back into a village which we are policing up and living good. We salvaged a piano (By salvage we mean any thing that we can pick up). So you see we are having plenty of music.
Sometime ago we were policing up a captured village when I salvaged a crib (?) tick and all complete which owing to my shortness of stature I thought I could sleep in fine. The leads to the joke I want to tell on myself. During the night I dreamed that a German slipped up on me while on post when he stuck his head over the trench I began to slide down down until I got my hand on my revolver when I suddenly awoke And what do you suppose had happened Well I had shoved my feet through the foot of the bed and out from under the cover. Take it from me I am not salvaging any more baby beds ha ha!
The latest rumor that we have had is that we are classed among the best fine fighting Divisions and that we are going to get to tour the country so I may get a chance to drink a glass of milk in Bauer’s Cafe. However, if we have to fight our way there Bauer wont be there to serve milk ha! ha!
I can imagine you people of Kirksville of different opinions getting together for one cause. This, however has brought this war to a quick finish and we sure appreciate your fine cooperation.
You did right to help the Salvation Army for they have loyally supported us.
Dr., every time that I have heard from you I have made an important move. Here to hoping to hear from you soon and that the move will be homeward bound.
With Best Wishes,
Sgt. Hugh A. Luck
Please Excuse the poor quality of paper but it is captured from the Germans, And this is all I have to write on.