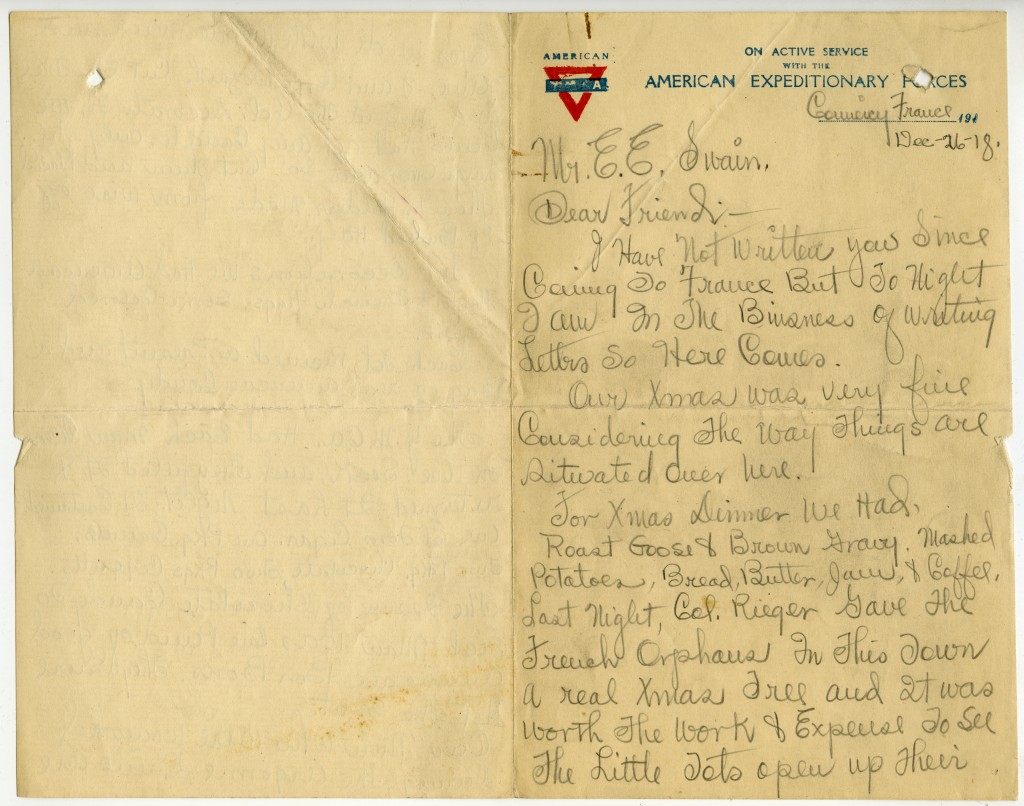 Mr. E.E. Swain,
Dear Friend—
I have not written you since going to France but tonight I am in the business of writing letters so here comes.
Our Xmas was very fine considering the way things are situated over here.
For Xmas dinner we had, roast goose & brown gravy, mashed potatoes, bread, butter, jam, & coffee. Last night, Col. Rieger gave the French orphans in his town a real Xmas tree and it was worth the work & expense to see the little tots open up their eyes wide with wonderment and awe. I and Corp. Bozarth cut the free and helped the Col. decorate it. We could not get any candles only the larges ones and so cut them and placed them in holders made from wire off of bailed hay.
For decorations we had American flags & French flags. Some colored paper.
Each tot received a present and a bag of real American candy.
The Y.M.C.A. had each man turn in one sock and they filled it & returned it last night. It contained one El Toro cigar, one pkg. camels, two pkg. chocolate, two pkg Ciggretts. The issue of chocolate candy to each man was one pound of good American bon bond. They sure hit the spot.
Our men who were wounded during the Argonne drive are just getting back to us yesterday and today.
President Wilson was in our neighborhood yesterday but we did not get to see him.
We are quartered in what was before the war. A gin will and it has an old fashioned water wheel under it and the lull puts us to sleep every night.
We eat supper at four and it is dark by four thirty and by six every body is about in bed and taking life easy. We drill in the forenoons only and use the afternoons in washing and killing cooties. Cooties are our best friends and they are not a respecter of persons either.
Lt. Col. Rieger is one of the best liked men in the A.E.F. by all. He sure is the privates friend.
Capt. Heiny is the same old Jack as always we dont get to see him as often as we would like to but when he does get to come & see us we sure have a good visit.
Capt. Cater is in charge of the Provisional Company made of the 139th Inf Two squads from from each company to parade for Big Bugs and it is called C Co. Too Now what do you think of that.
I know we will be getting home some of the days and I dont think any of the boys will want to get away very soon. Of course we are leaving some good comrades over here, but we are extremely luck that we have as many of the original company left. Now. When you hear the story of the Argonne Forest from the men direct you will wonder how any of us got out at all.
Being on the right side of the fight. I guess I had some thing to do with it. I will sure be glad to get home and rest. And get back to the Old Wabash to work and have the people cuss about trains being late. Ha. Ha.
It has actually rained for nine straight weeks over here and it so still at it. No chance for it quitting I guess.
Cook H. Kamp just brit on some home made candy. It sure looks good I would like to send you a chunk of it. Well we are all in good health & spirits and want to come home as quick as possible, but can stay willingly until every thing is all settled up. And not halfto come back again. Tell Shubert to come on with a letter.
Give my best to all my friends
Everything all OK
Your Friend.
Sgt. E.W. Howey 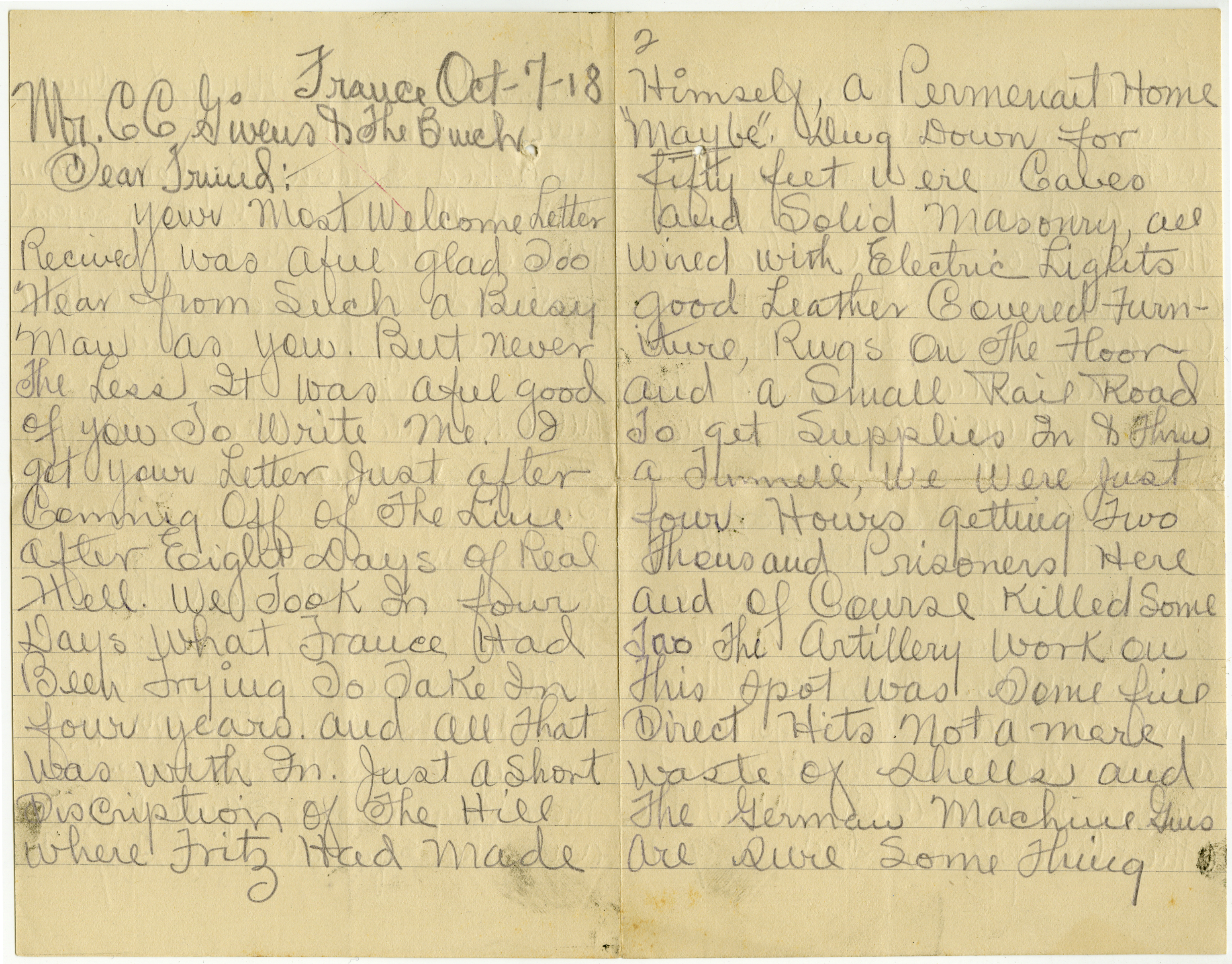 Dear Friend:
Your most welcome letter received was aful glad too hear from such a busy man as you. But never the less it was afoul good of you to write me. I get your letter just after coming off of the line after eight days of real hell. Well took on four days what France had been trying to take in four years. And all that was with in. Just a short description of the hill where Fritz had made himself, a permanent home “maybe”. Dug down for fifty feet were caves and solid masonry, all wired with electric lights good leather covered furniture, rugs on the floor and a small rail road to get supplies in & thru a tunnell. We were just four hours getting two theus and prisoners here and of course killed some too the artillery work on this spot was some fine direct hits. Not a mere waste of shells and the German machine guns are sure some thing fierce to run into. They spot them in small cement holes with plenty of ammunition and a chain & padlock keeps the operator there of course and when he shoots until one gets up to him his “Kamrad” stuff dont go very far. If there are any men who want to take prisnoers it is aful hard for you to get back with them. Some body will snipe them before you go very far back. Takes too much time to make the trip with a few. Get Me. Charley I got Ratons to old C.Co. when the other campaniles dident get any. I lost my mules & driver and never got hurt only knocked down by concussion. I had my clothes cut on several places and a cut on my forehead that bled a little but outside of that & getting a good breath of gas I am all O.K. and consider my self extremely a Lucky Boy. Tell Mrs. Givens I have the sweater on now she knit for us boys feels good these cold night. Fritz shoots high explosive shell at us and then mustard gas. But it dont stop Mr. Yank nothing can stop us now. Fritz has began to equal now and the equal will turn to a hallow before Xmas. Our motto is “Hell Heaven or Hoboken” before snow this. And I think we are going to make it good. Charley you just ought to see the American Artillery at work they hit what they shoot at nine times out of ten and you know that counts. I expect help is pretty scarce, but if every body there actually knew what the true state of affairs was here they would lock up and come over here and get a gun. But of course there isent any need of such a think as that there are plenty of fellows situated just as I was in the states to do this job if they would only get busy. If I get home safe I will have a story that will be worth more too me than all my twelve years of school.
I suppose you have read in the papers about the trenches & caves & yards of barbed wire we ran into in this drive we made bridges over barbed wire entanglements out of chicken wire netting & iron rods and walked over it. Can you imagine any such thing, we have lost quite a few men but the ground we gained of the “Fritzes” be damned & captured was worth it. Just as soon as we get new clothes & a bath or two we are going to take another cut at “Fritz”
I want to tell you your letter on the order sheets sure looked fine and a whole lot better than some fancy stationary to me.
As for sending me something I dont want for a think Charley They furnish plenty of smoking tobbacco, “Bull Durham”. & the Red Cross & Y.M.C.A. has the other things so thanks very much for your offer. The only thing we long for is mail Well give my best to Mr. Shryach & the rest of the Force & tell Frank to work a little now and then To keep on practice. I hafto use all kinds of writing paper it is scare sometimes Give mrs. Givens my bet regards & write again when you can.
As Ever
Sgt. E.W. Howey

I was in the Metz drive and Hus one.