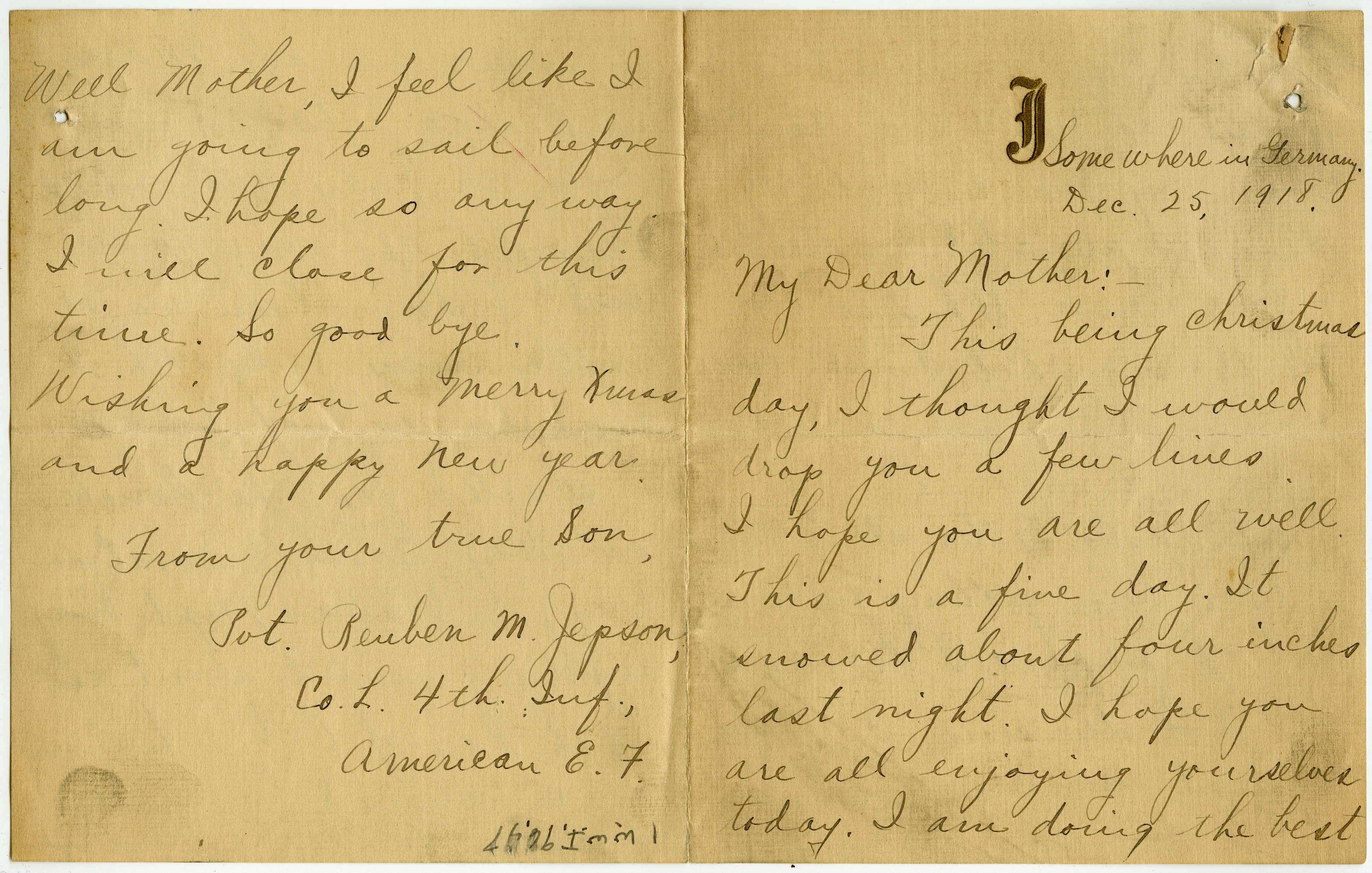 My Dear Mother,
This being Christmas day, I thought I would drop you a few lines. I hope you are all well. This is a fine day. It snowed about four inches last night. I hope you are all enjoying yourselves today. I am doing the best that I can. I received a box from the Y.M.C.A. this morning which was very much appreciated. We also had a good dinner. This is one Christmas that I will never forget. Being in Germany near the Rhine
I got Paul’s letter all O.K. I have been getting quite a lot of papers. I belong to the 3rd. division. It has a good name.
This division stopped the Germans on the Marne, and also started the big drive on July 14th. which brought the war to an end. I have been in 11 battles since July 14th. I consider my self lucy. I started for the trenches on May 30th. (Decoration Day,) and was kept busy fighting until about the 28th. day of Oct. when we were relieved by another division from the front lines.
Well Mother, I feel like I am going to sail before long. I hope so any way. I will close for this time. So good bye.
Wishing you a Merry Xmas and a happy new year.
From your true Son,
Pvt. Reuben M. Jepson 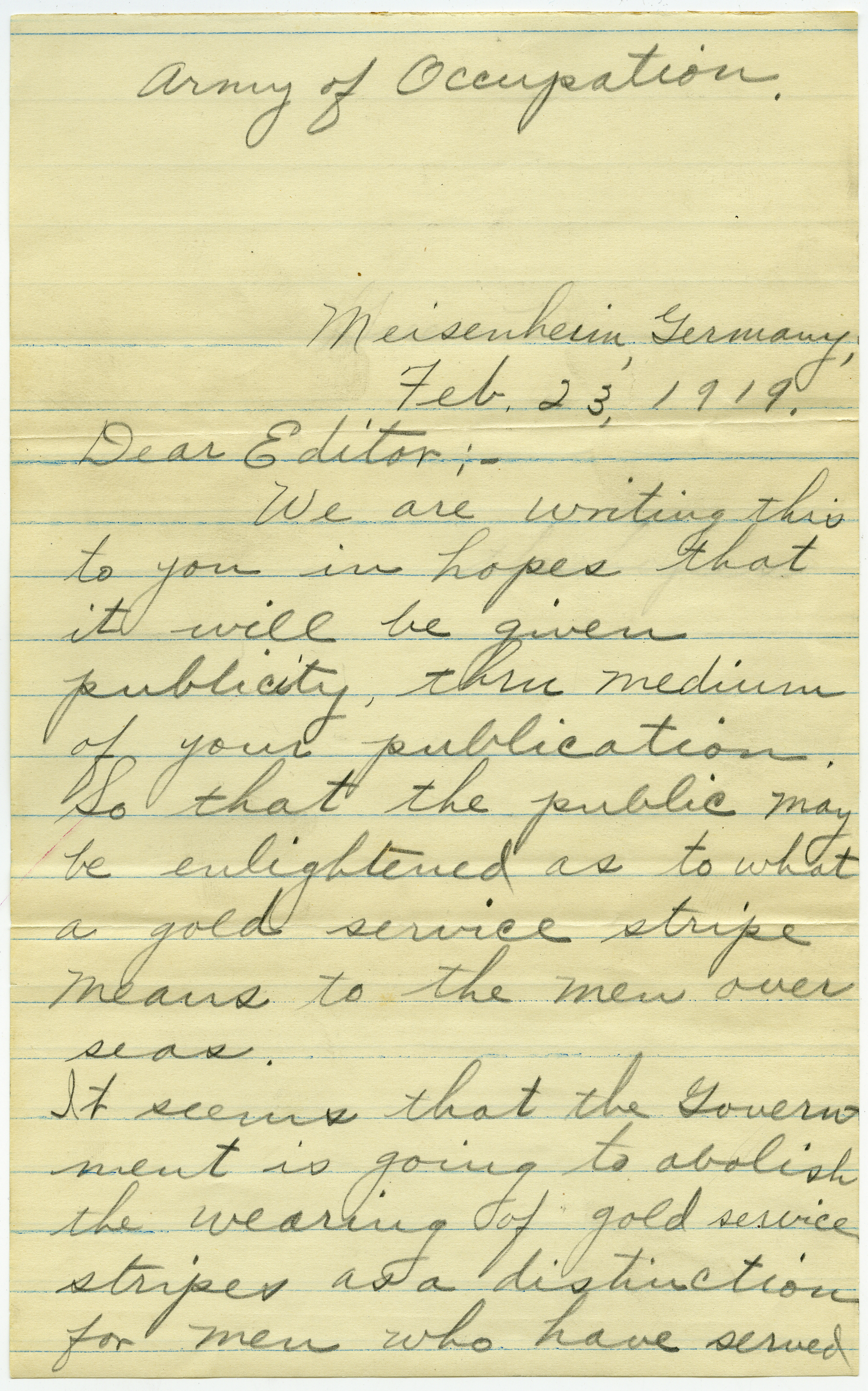 Dear Editor:-
We are writing this to you in hopes that it will be given publicity, thru medium of your publication. So that the public may be enlightened as to what a gold service stripe means to the men over seas.
It seems that the Government is going to abolish the wearing of gold service stripes as a distinction for men who have served the flag overseas, because of the envy of those unsophisticated soldiers who were in the camps in the states. While we were enduring untold hardships overseas. While they were going on week end leaves we were risking our lives on a troop ship. While they were riding in passenger coaches, we were riding in cattle cars towards the front.
While they were eating the best of chow, we were sometimes half starved, and had to risk our lives just to get enough to appease our hunger. And while they were facing a harmless rifle range, we had to face death in the form of a raging hell from the enemy. And while they were staying in good sanitary beds, we were sleeping in the open on wet ground, or in dugouts infested with rodents. And when they took a bath and changed clothes, they had the convenience of light at night, we had to be satisfied with total darkness because of exposure to the enemy, if we had even as much as a match light.
And now that the war is practically over, they are back again at their home firesides, while we must stay over here in the enemies country until peace is assured.
And in spite of all these things, they would deny us the privilege of wearing a gold stripe as a distinction for service overseas for the flag of the U.S. which helped to make the world safe for democracy.
I hope from this, that the general public will realize that the gold stripe stands for hardships which have to be experienced to be appreciated, with no animosity toward those who did not have the opportunity to get over to the hell that was.
I remain yours respectfully,
Pvt. F.C. Reuben M. Jepson