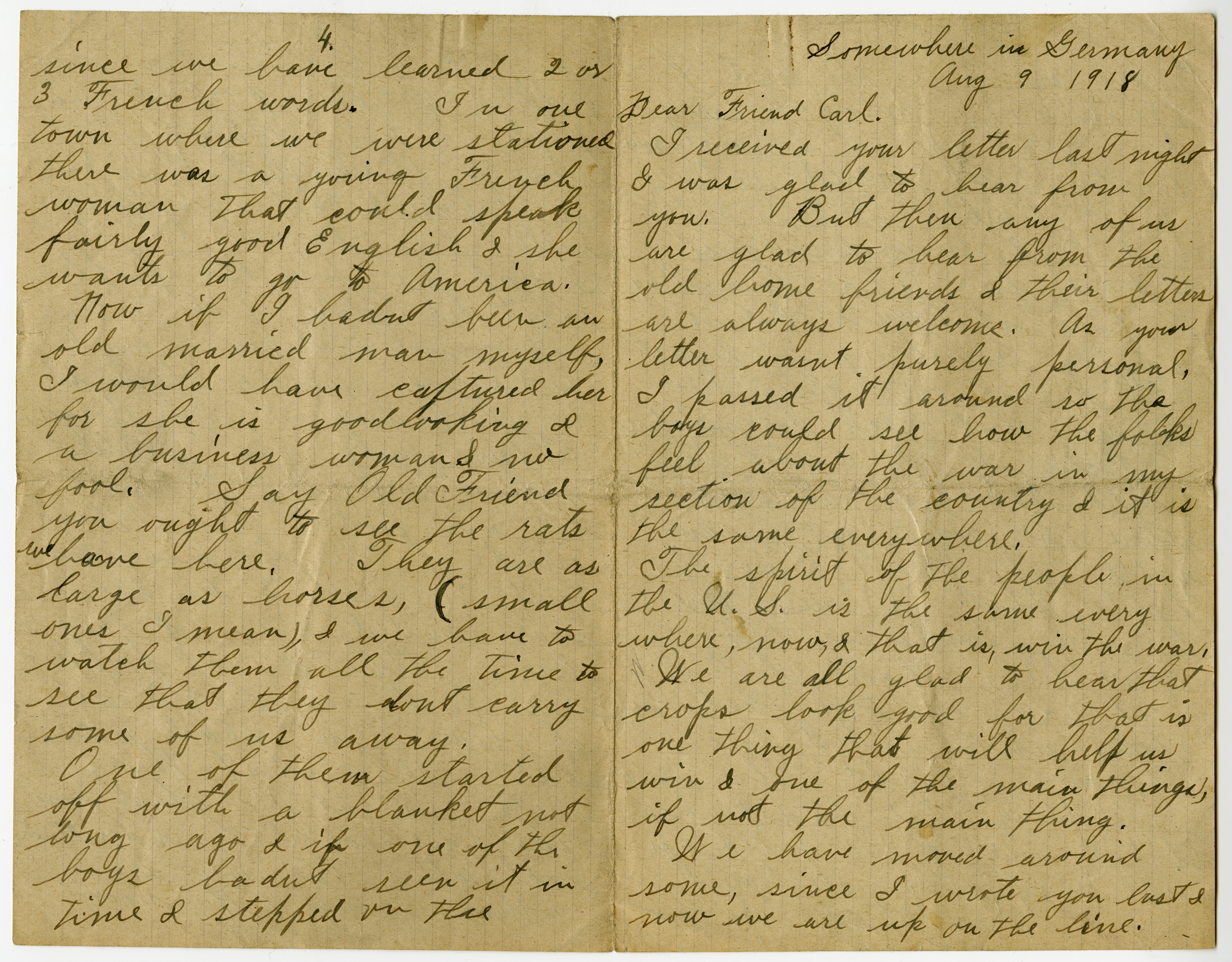 Dear Friend Carl.
I received your letter last night & was glad to hear from you. But then any of us are glad to hear from the old home friends & their letters are always welcome. As your letter wasn’t purely personal, I passed it around so the boys could see how the folks feel about the war in my section of the country & it is the same everywhere.
The spirit of the people in the U.S. is the same every where, now, & that is, win the war. We are all glad to hear that crops look good for that is one thing that will help us win & one of the main things, if not the main thing.
We have moved around some, since I wrote you last & now we are up on the line. Every one is in the best of spirits & are ready to carry on. We are in a mountainous country well covered with pine timber. It is rather cool here, so cool in fact that a fire is a fine thing to have at times & that is saying something for August. It rains quite often here so we dont lack for moisture.
Some of the timber here would look fine at home, where we could get a saw mill at it. But the timber that is near the trenches looks as tho something had bit it.
I saw one town that has been under shell fire & it is a sight. There wasnt a building that hadn’t been hit, & some of the buildings are completely destroyed.
Some of the boys that can speak German have been talking to some of the German people in this section & they seem to think that their case is hopeless & that everything will soon be over. I don’t see how the people exist, let alone live, as there isnt much tillable ground here & we would starve in a short time on their wages.
Their daily wage would just about buy the salt for our food. And I think most of the Germans here will be glad to see the war ended, even if they do lose. The French people sure treat us fine & all of them seem glad to see us. The worst thing with us at the start, was that we couldnt understand each other, but we are getting along better now, since we have learned 2 or 3 French words. In one town where we were stationed there was a young French woman that could speak fairly good English & she wants to go to America.
Now if I hadn’t been an old married man myself, I would have captured her for she is goodlooking & a business woman & no fool. Say Old Friend you ought to see the rats we have here. They are as large as horses, (small ones I mean), & we have to watch them all the time to see that they dont carry some of us away. One of them started off with a blanket not long ago & if one of the boys hadnt seen it in time & stepped on the blanket, it would have been goodbye blanket.
Some of the boys were awakened the other morning by a terrible racket & looked out to see what was wrong & saw one rat with his hard shell hat on, trying to get away from another rat that had his rifle and bayonet. The one with the rifle would make a bayonet charge on the other & he would duck his head & the rifle or bayonet would strike that steel helmet & make a terrible noise & that is what woke the boys up.
One of the cooks steeped out of the cook shack & came back in time to see 2 rats starting off with a 10 gallon can of hot coffee & another pair trying to get the kettle of beans off the fire. We have a new way of digging potatoes here. Just drop a shell in the “tater” patch & after it explodes, go out & pick up your taters, if you can find them. They also cut wood with shells. That might be a good way to thresh beans, tho I havent seen it tried yet. Just a drop a shell in a newly planted garden & the garden will come up quick. It beats the neighbors chickens at that. There are lots of yellow jackets here & they are like those at home, they sit down too hard. There is one thing I dont think you can find in France, & that is a slacker.
From a letter my wife wrote me about the 4th of July at Novinger, there surely are not many slackers there, when it comes to Red Cross work. And I dont think there are so very many in Adair County. And I think the people of Stahl & vicinity are always to do their bit. And the boys over here will do their bit, too, ever fear. So Mr McCahn is opening the old shaft again. I hope it turns out good this time. I wish I could drop in on you for a visit with all my old friends.
And I would sure help you with the church seats, too.
Well I believe I had better close or the censor will burn this instead of carving on it just to save the time reading it. Read this at Sunday School if you like, so my many friends will know I think of them, if I dont write to them. Would like to write to all of them, but if I did, I wouldnt have time for anything else.
Give all my best regards. Hope all are fat & sassy like myself, but then all here are in good healthy & ready for anything With best wishes to all & wishing you every success, I remain
Your Friend
Mech. J.M. Runyon