The War on Campus

The Great War period saw many drastic changes in the Kirksville State Normal School both on campus and off. Students and faculty alike pitched in to assist the war effort. On one occasion, President Kirk announced,

I am glad to be the president of a School that forges forward against such obstacles as have confronted the faculty and students of this institution this year (1917). I do not learn of any other school that has sent so large a proportion of its students into war.1

While 443 students and former students from the K.S.N.S. participated in military service during the Great War, hundreds of other students left on campus served the war effort in myriad ways. The Red Cross, the Camp Fire Girls, the Boy Scouts, and the Y.M.C.A. were popular volunteer outlets. Additionally, the school offered special classes in food conservation, classes in caring for the sick, and classes in providing first aid to the injured, as well as military tactics for both men and women.2 Drives for funds and loans were key opportunities for K.S.N.S. students and faculty to support the war effort: the second Liberty Loan drive raised $5,000; the Y.M.C.A. war work raised $2,735; the first Red Cross drive earned $900; the Armenian Relief sent $278; and the Soldier’s library raised $100. Furthermore, students of the K.S.N.S. raised three thousand books which were sent directly to soldiers in France.3 Private gifts were made by generous faculty and students to purchase war savings stamps, baby bonds, friendship war funds, and other wartime services.4

Shortly after the war declaration, a “loyalty day” was held in Kirksville on Wednesday April 25 at the decree of Mayor Goben and other city authorities. “Loyalty Day” featured one of the largest parades ever held in Kirksville: participants were estimated to number twenty-five hundred. Students and faculty from all the schools in Kirksville, the American School of Osteopathy, and the K.S.N.S. participated in the festivities. After Mayor Goben addressed the crowd on the courthouse lawn, the day concluded in a surge of patriotism and loyalty with the singing of the “Star Spangled Banner.”5Another such outpouring of support for soldiers abroad occurred on September 20, 1917 when faculty and students led by Professor H. A. McKean marched to the public square. There, E. O. Jones of La Plata delivered the main address.6 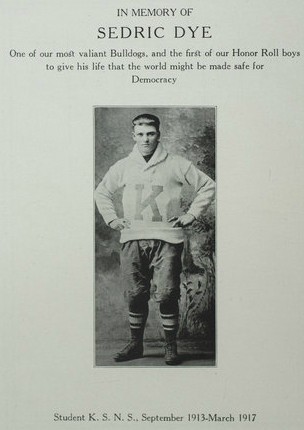 “In Memory of Sedric Dye”

At the beginning of the war, students of the home economics classes made a service flag eight by ten feet in size and made of the finest wool bunting. With a red band around a field of white, the flag featured a blue star for each man in the armed forces from K.S.N.S. A large blue star in the center of the flag represented General John J. Pershing who graduated with the class of 1880. A red triangle was added for those doing work with the Y.M.C.A. The gold stars on the service flag represented those who did not make it home from war. When the flag was unfurled on December 5, 1917, it had 113 stars, two of which were gold. By the end of the war, fifteen of the stars were gold: one for each of the K.S.N.S. students who had made the ultimate sacrifice: Paul Bibee, Harold Bohon, Claude Duff, Sedric Dye, Walter W. Fountain, Dale Geohegan, Pearl E. Gonnerman, Herbert MacDougall, Wilford W. Martin, Lloyd McAllister, Guy McFadden, Walter J. Slover, William H. Smith, Edgar Thompson, and Marcus Hatfield.7 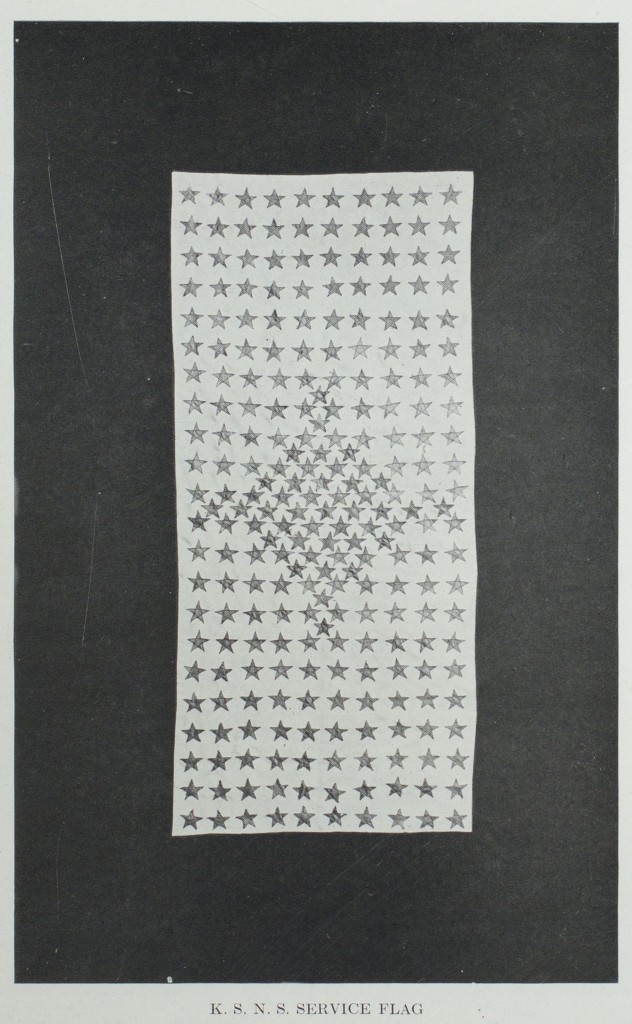 At the dedication of the service flag on July 18, 1918, Dr. Eugene Fair delivered a powerful address:

Soldiers and Sailors: Gone you are from these dear old halls; some of you already have passed to “the sunset gates of gold”; some of you midst slime and vermin, helmeted and clothed in the uniform of the United States, bayonets whetted to a razor’s edge, are now along the Marne and Italy’s front. Some of you are on the deep, keeping the sea lanes clear and holding out aid to all the distressed. Some of you are in the United States getting ready to go. You are there; we are here. Let us call you back to this old-time assembling place. A moment we ask you to come — and then only in spirit. On this flag we raise this morning there is a star for each of you. How little we who remain behind can do for you. But it does us so much good to do what we do. We do it with a great but suppressed, enthusiasm and in humility. Neither you nor we claim that we are one of a League of Nations, which are willing to fight that war may be banished from the earth. We are proud of you, of course, but we are not boastful about it. We know your French, English, Italian, Portuguese, and Russian brothers in arms have big souls like your own, and linked arm in arm with them, you will see that the shades of night do not settle permanently over the world. Soldiers and Sailors, the students and faculty of your alma mater raise this starry flag. It is the emblem of your gladsome hearts as you fight in air, on land, and on the sea. It signifies our faith in you and in ourselves. It says, we shall not falter — we know you will not. Come back, oh, come back, but only when your work is done. Then we will fold the flag together and keep it in remembrance of great days and ours.8

ECHOES The War Came, And- THE K. S. N S., having extraordinarily large numbers of men in the service and being a school with a rare spirit of fellowship and depth of feeling, realized her responsibility in a patriotic sense of willing-ness to sacrifice and during the past year has made a notable record in giving money and time in war work. At the beginning of last summer’s term a Department of National Emergency instruction was established in addition to the regular school work and outside of the regular school hours. The purpose of this move was to provide instruction in work which was made more important and necessary by our participation in the war. Instruction was given in First Aid to the Injured, Home Care of the Sick, Camp-fire Work, Boy Scout Work, Girl Scout Work, Red Cross Work, and Food Conservation. The enrollment of the students in the classes was far above what was expected and almost seven hundred received instruction in the different branches. At one of the Assembly periods last summer a call for Red Cross funds was made and over two hundred dollars was pledged that morning. During the fall term when the big drive for the Second Liberty Loan was on, the time from assembly until noon one morning was given by President Kirk for the students to do their part. $11,500 worth of bonds were bought by the faculty and students. All of the college classes and practically all of the other student organizations bought bonds. Not very long after the Liberty Bond Campaign came the Y. M. C. A. Drive for the Students’ Friendship Fund. More effort was given in this movement than had been given in any other, and faculty cooperation with the Y. M. C. A. leaders gave it great impetus. When the pledges for this fund were counted it was found that the K. S. N. S. students had pledged $2,735. This was a larger amount than any other school in Missouri had pledged excepting the University. The average amount per capita for all of the students of the school was about $9 and about $11 for those who pledged. Next came the Armenian Fund. This call was presented at two different Assembly periods and when the contributions came in the amount raised was nearly $300. The Normal School has one room fitted up for surgical dressing work so that the townswomen and the Normal School girls can work. The response in this activity has been excellent and the girls have made a very large number of surgical dressings. The K. S. N. S. has a service flag containing 260 stars and there are more to be added. The number grows rapidly and it will not be long before the 300 mark will be reached. In an Honor Roll list the names and correct addresses of almost all of our men in service are kept on record. The Normal School Index is sent every week to the men whose addresses we have. At Christmas time the names of all K. S. N. S. men in service were divided among the student body and each soldier received Christmas letters from two of the students. Almost all of these letters were answered with many expressions of gratitude. These are some of the most prominent ways in which the Kirksville Normal School has done her part but many other smaller things were done; the Normal School’s part in parades and demonstrations of the city of Kirksville being particularly prominent.9

Featuring images from the Echo, the image gallery below depicts campus during the Great War period and also some of the patriotism found within the pages of the yearbook. 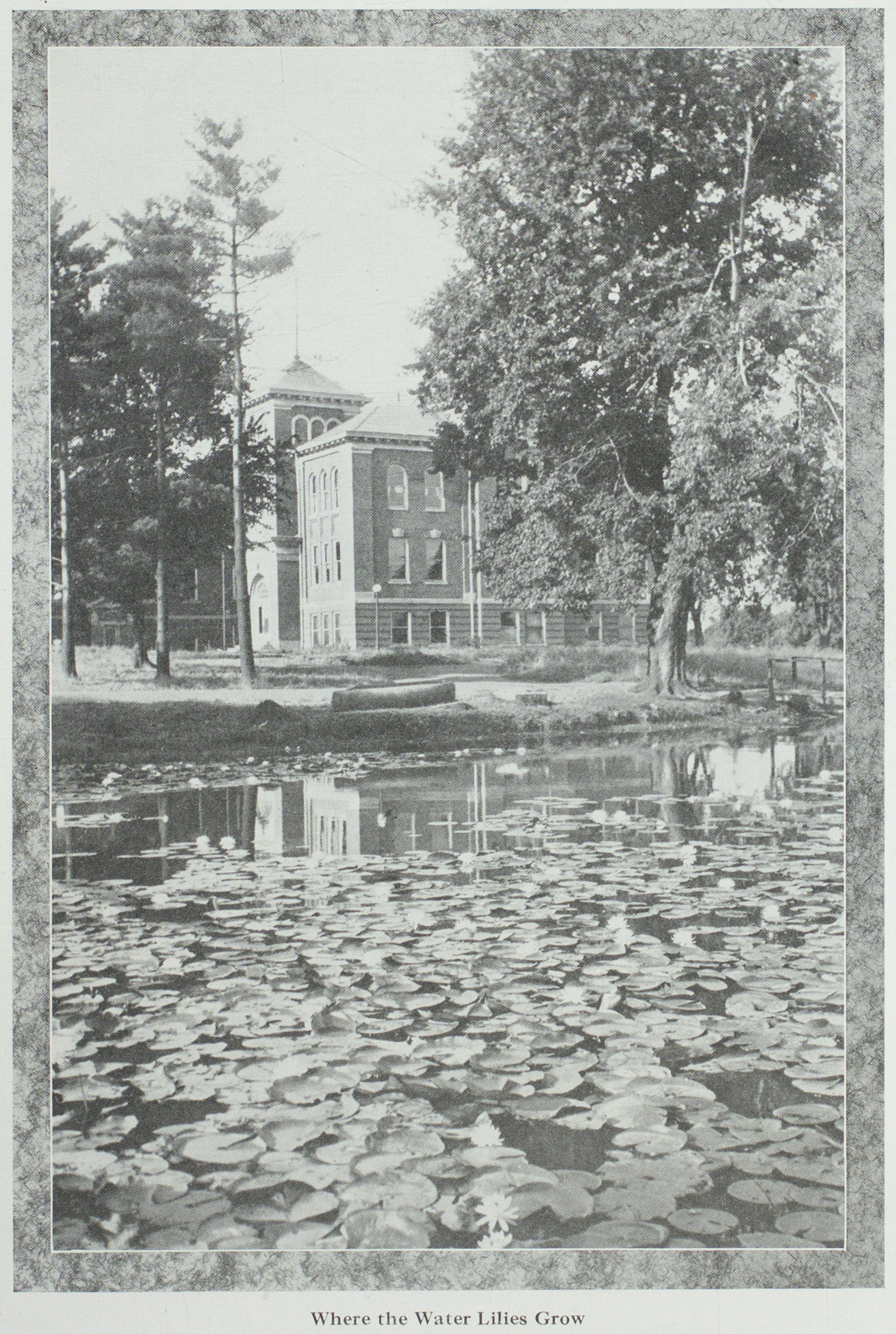 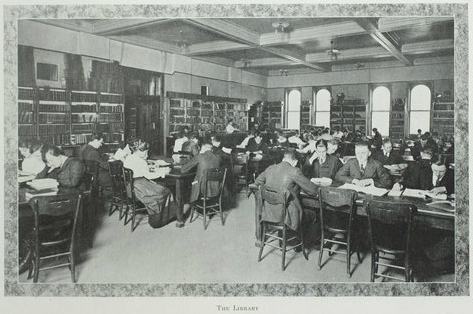 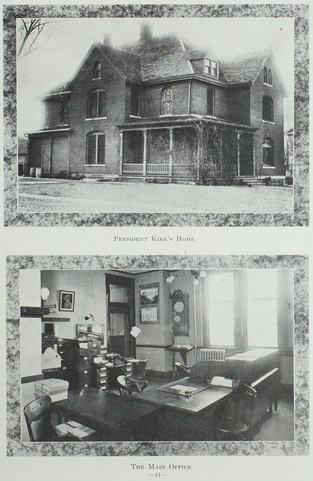 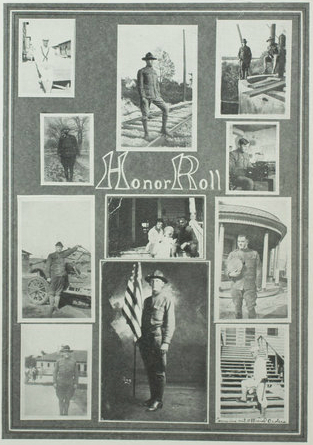 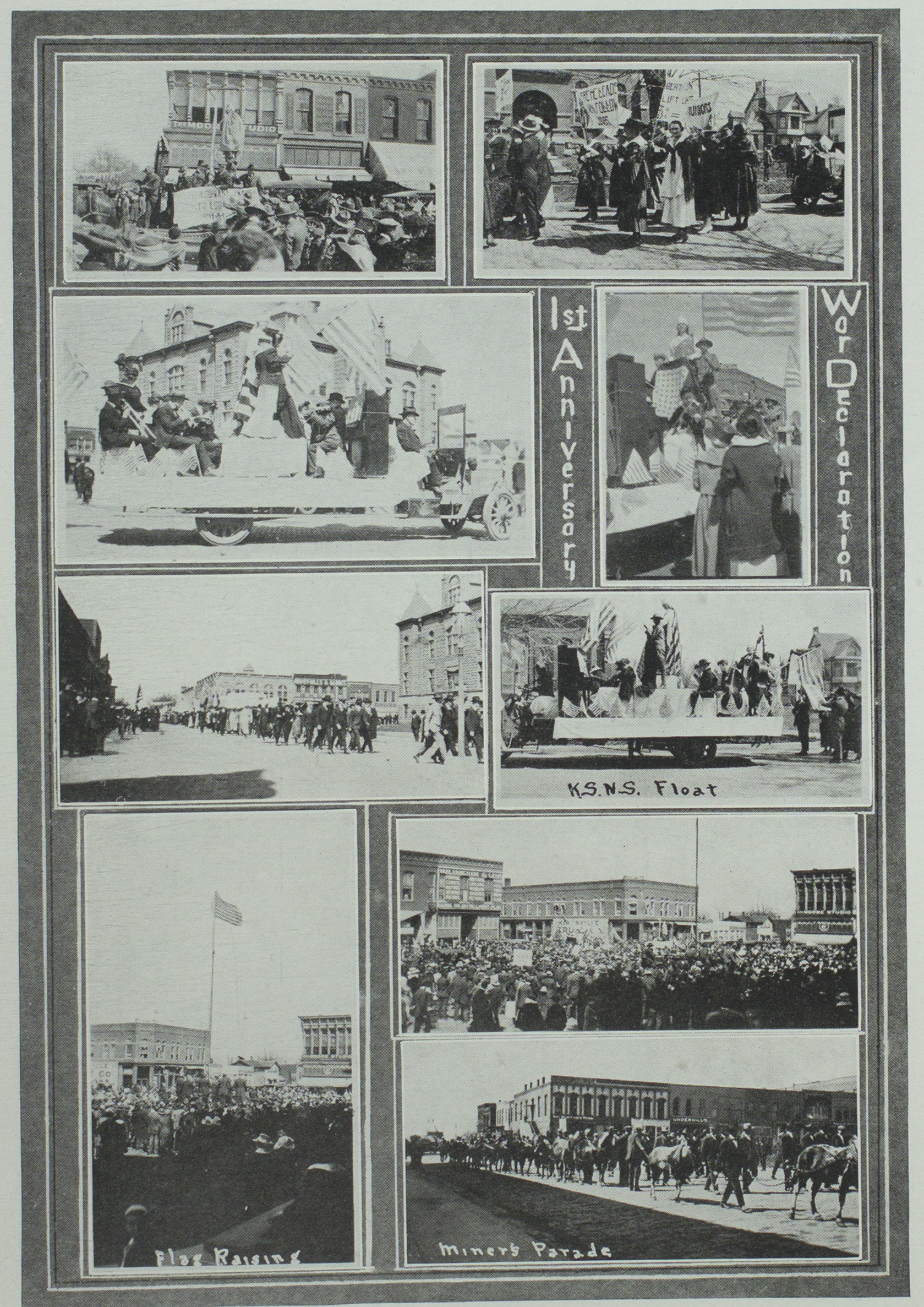 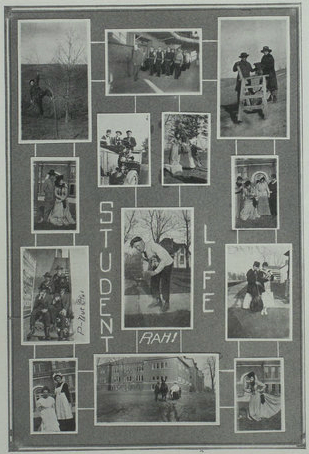 Tell those Bulldogs for me to get in the game and win. Tell them to stick it out to the the end and not lose in the last five minutes of play any more. I’m expecting to hear of them in the future as another championship team.
Charles A. Epperson