The American School of Osteopathy

Founded in 1892 by Andrew Taylor Still, the American School of Osteopathy (ASO) (Now A.T. Still University) was the first osteopathic medical school in the world.

The American School of Osteopathy, ca. 1918.

Dr. A.T. Still believed in a combined method of healing, using manipulation of the musculoskeletal system as well as pharmaceuticals to treat disease.  A.T. Still died in December of 1917, leaving his hospital and school heartbroken and unsure of who would take over as head of the ASO.

Following A.T. Still’s death in 1917, the ASO witnessed a great upheaval after electing the next head of the school took more than a year. The ASO Board of Trustees met in January of 1918 to decide who would take charge of the school and hospital. Drs. Charles and Harry Still, Dr. George Still, Dr. George Laughlin, and E.C. Brott were members of the board. In the ensuing election, Dr. Charles E. Still, vice president and acting head of the ASO for several years, was disappointingly not chosen to fill his father’s place as the official head of the school. Dr. George M. Laughlin (A.T. Still’s son-in-law) was elected instead; however, Laughlin remained loyal to Dr. Charles Still and would not accept the position. The board refused to act upon Laughlin’s resignation and elected Dr. George Still (A.T. Still’s great nephew) to lead the ASO in February, 1919.

The son-in-law of A.T. Still, Dr. George Laughlin (1872-1948), also a graduate of the ASO and pioneer of osteopathic and orthopedic surgery, started the Andrew Taylor Still College of Osteopathy (ATSCO) in 1922. This ATSCO was a rival institution just down the block from the American School of Osteopathy. By 1924, Laughlin bought out the remaining stock of the ASO and combined the two schools, renaming the synthesized institution the Kirksville Osteopathic College. Dr. George Still and then Dr. S. S. Still served as presidents of the ASO before the university merged with its rival in 1924.1

The ASO and the Great War

During the First World War, doctors of osteopathic medicine were not permitted to practice in the U.S. Medical Corps.  Despite a fervent effort to have the law changed, D.O.’s were unable to officially serve as physicians in the armed services.  Enough pressure was brought on the American Medical Association that former president of the AMA William Crawford Gorgas threatened to boycott the U.S. Medical Corps.  Gorgas declared that M.D’s would not enlist if osteopaths were permitted to practice in the Medical Corps.  Consequently, D.O.’s enlisted in other branches of the military, served in supporting roles like ambulance drivers, or remained on the home front to care for civilian populations.  Osteopathic physicians were denied entrance to the U.S. Medical Corps; however, the students of the ASO Nurses School were approved for service in the U.S. Nurses Corps.2

In April of 1917, the American Osteopathic Relief Association was formed in Kirksville.  Dr. George Still was elected as the director general; he announced, “If we cannot get recognized, we will get prepared and cooperate.  We will outfit at least one volunteer hospital.”  340 men and 60 women signed up for the AORA.  Volunteers formed companies of twenty-five and were divided into three branches: physicians, students who served in other hospital capacities, and female nurses.  The AORA met in Dr. Charlie’s pasture on Osteopathy Street, where the groups of volunteers performed drills and were instructed in camp hygiene and emergency care.3 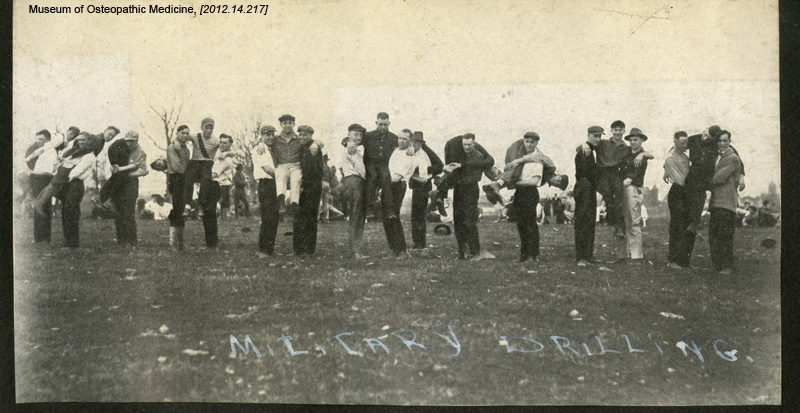 In the fall of 1918, Dr. George, then head surgeon at the ASO, offered free service at the ASO Hospital to any osteopathic physician, student, or Adair County man in need of remedial surgery in order to be fit for military service. Later, this offer was expanded to include the Student Army Training Corps at the neighboring Normal School and boys in twenty surrounding counties.  In April, Dr. George expanded his generosity further, offering all returning sailors or soldiers injured in foreign service free surgical, orthopedic, and osteopathic care so long as they paid for their own room and board. 4

When the Spanish Influenza epidemic hit Kirksville in 1918, the American Red Cross held a meeting for all interested parties and placed Dr. George Laughlin in charge of protecting Kirksville residents from the brutal virus.  This attendees of this meeting also decided not to admit contagious cases to the local hospital, so an emergency influenza hospital was established at the vacant Theta Psi Fraternity House at 301 S. Franklin.  In less than twenty-four hours, a seventeen-bed hospital was in full operation.6 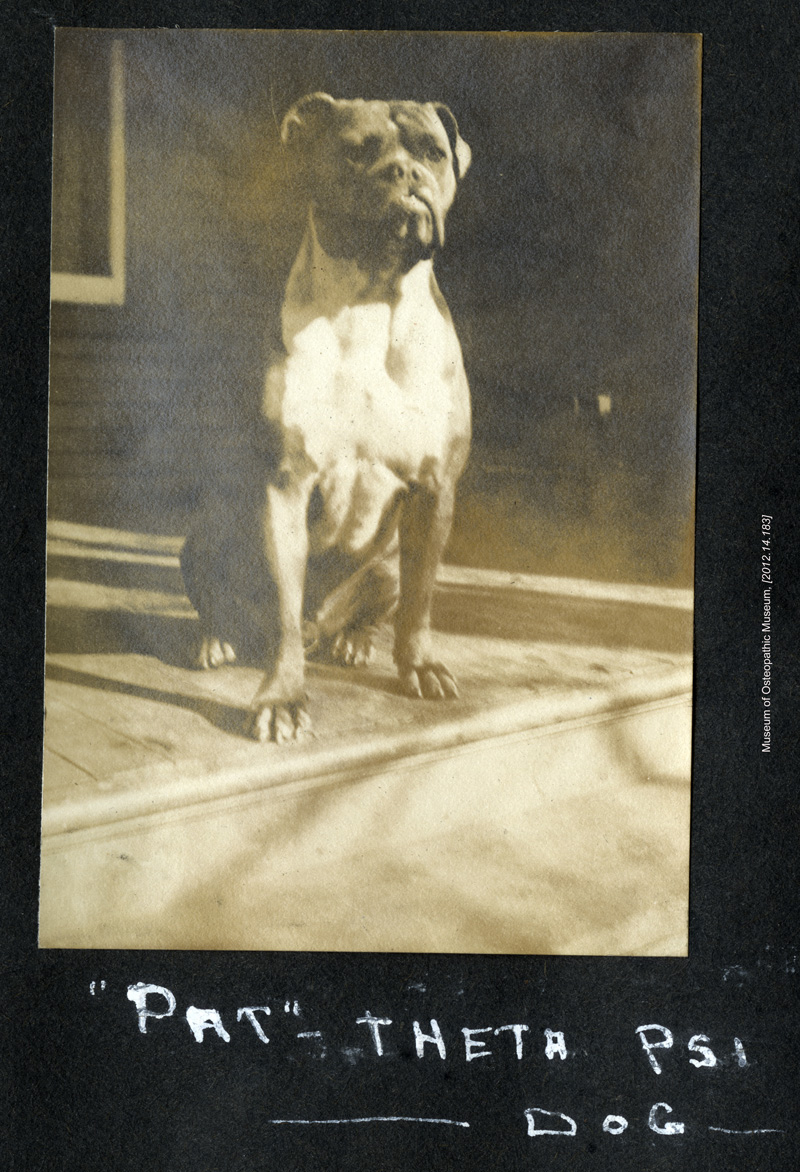 Both from the ASO, Dr. Tom Ashlock and Cora Gottreu, R.N. were placed in charge of the temporary hospital.  Open from November 16 to December 16, 1918, the hospital only saw one fatality: a child who was already critically ill upon arrival.  Thirty-six patients stayed at the hospital during its month of operation; nineteen of those individuals also had pneumonia complications.  The ASO dismissed during this month so students and professors could assist in efforts to protect Kirksville from the virus.  The two upper classes volunteered to make house calls, sometimes traveling across the county to perform multiple manipulations per day.  66 students over saw 1,114 cases in the Kirksville area and surrounding counties.7

For the duration of the Spanish Influenza Epidemic, Kirksville only had six fatalities.8 Only one of these was from the Normal School: Guy McFadden from Knox City. McFadden died on October 9, 1918; he was a member of the K.S.N.S. Student Army Training Corps.9 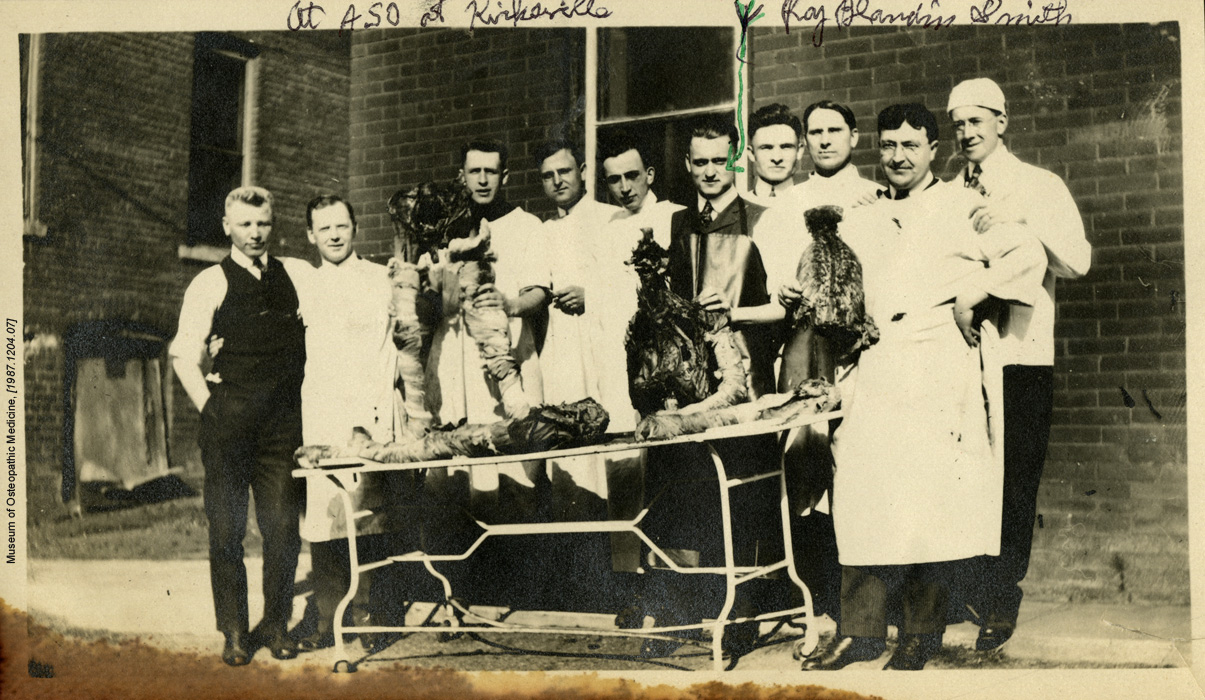 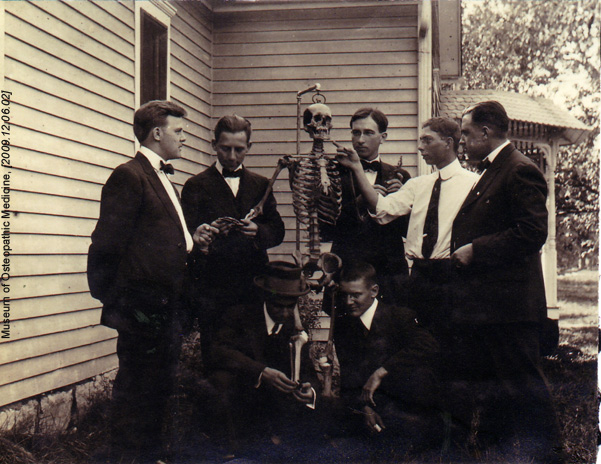 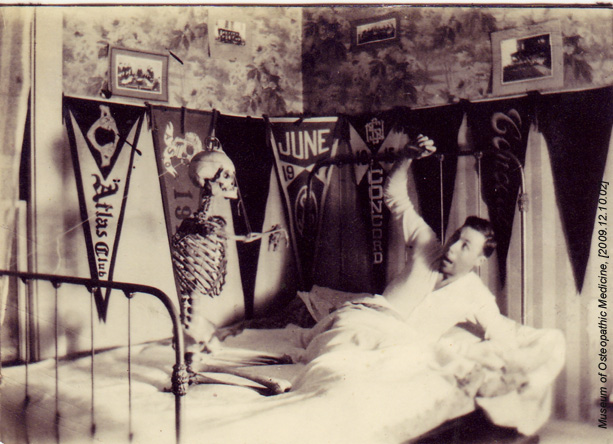 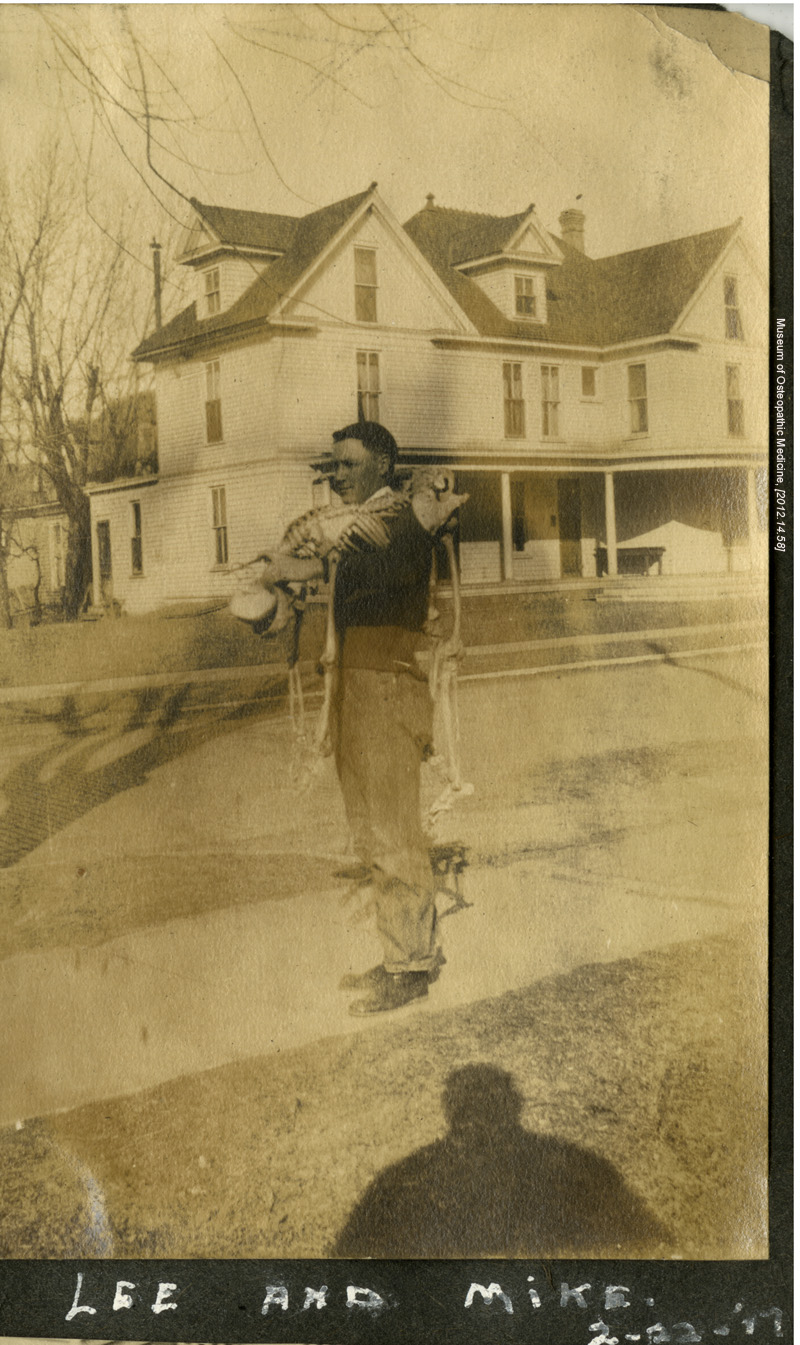 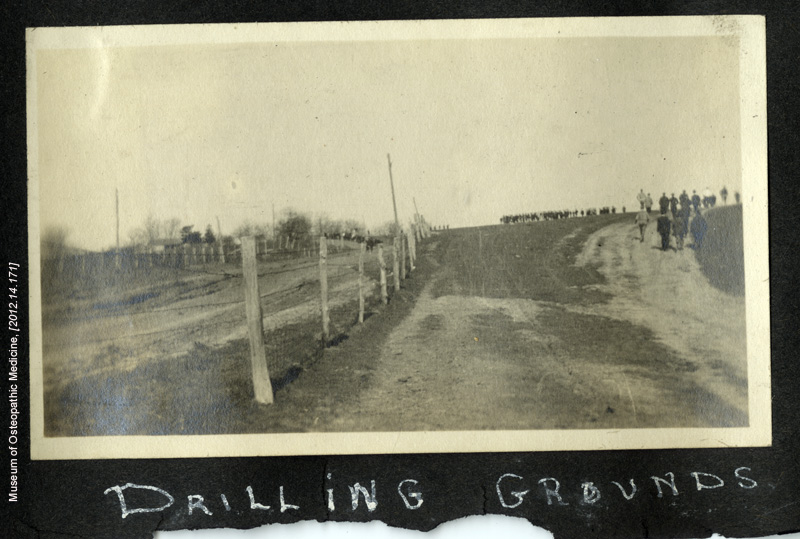 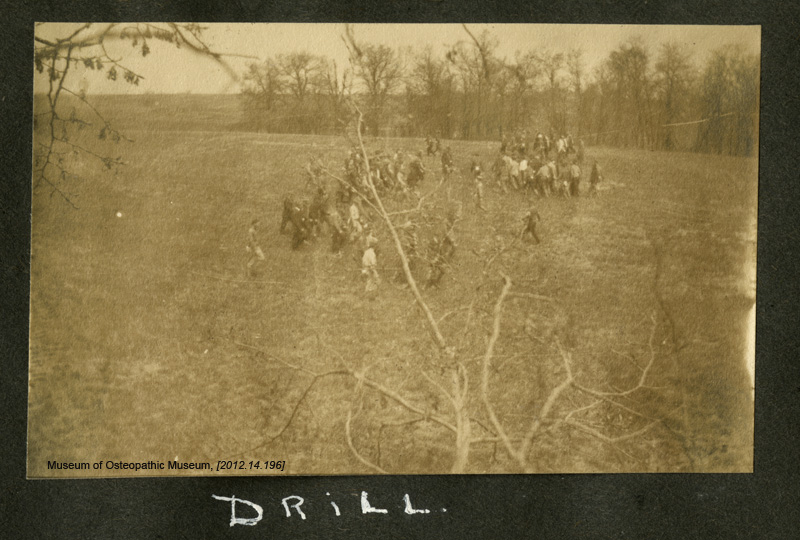 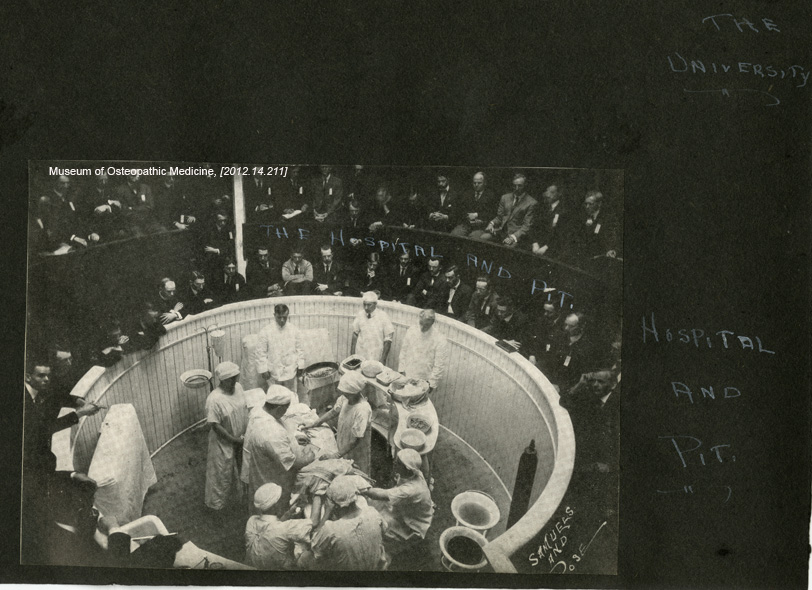 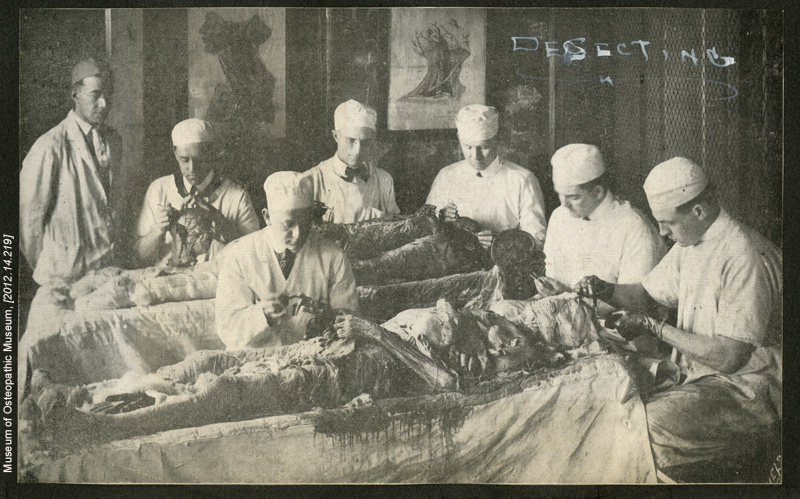 Since my arrival here in France it has been my good fortune to travel a great deal. I have travelled first, second, and third class (and also in Box Cars or 43rd Class as we call it).
Sgt. Byron H. Beatty